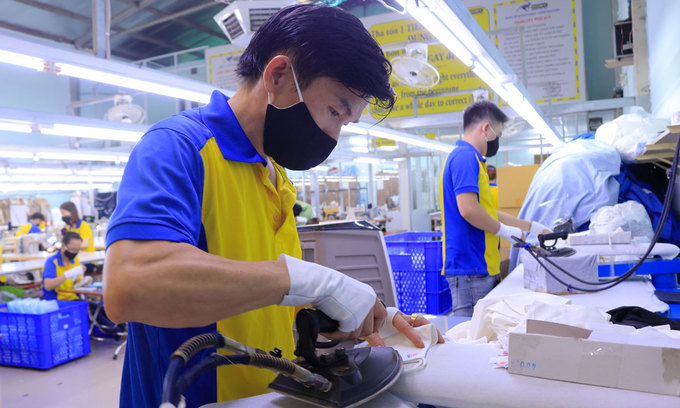 A worker irons face masks in a garment factory in Ho Chi Minh City on April 21, 2020. Photo by VnExpress/Nguyet Nhi.

The number of job cuts in Vietnam could rise in the second half of the year as manufacturing companies see orders plummet amid the coronavirus pandemic.

July marks the fifth month that Hoang, a carpenter in the Central Highlands province of Kon Tum, has been out of work due to the pandemic.

He was laid off in March when Vietnam started recording a surging number of confirmed novel coronavirus cases. His employer promised him that he will be recruited again when the situation improves.

When Hoang made a phone call earlier this month to ask about his job, the employer said the situation had not improved, with export orders not recovering to pre-pandemic levels.

“I applied for a job at a factory making bolts and screw in Ho Chi Minh City, but couldn’t get it, so I returned to my hometown to work as a farmer.”

Hoang is among 1.4 million Vietnamese who lost their jobs in the first half of this year. Most business associations anticipate further layoffs in the second half due to dwindling export orders.

Thang, owner of a wood processing firm in HCMC, said that he had shut down production for export since the Covid-19 outbreak because there is no demand overseas. Before the pandemic, exports accounted for 70 percent of the company’s orders.

He has laid off 60 percent of his staff, and the remaining have been retained to serve domestic demand, which has also declined from pre-pandemic levels.

Most wood product manufacturers in HCMC have cut their staff by 20-30 percent, according to Nguyen Chanh Phuong, deputy chairman of the city’s Handicraft and Wood Industry Association.

Since April, buyers from major export markets such as the U.S., Japan and the E.U. have been canceling or delaying their orders, and therefore, production of high-end furniture has mostly been suspended, he said.

A similar situation applies to textile and garment makers. With orders dropping 50 percent, companies have laid off 25-30 percent of their staff, and the ratio could rise to 40 percent by the end of the year, said Pham Xuan Hong, chairman of the HCMC Association of Garments, Textiles, Embroidery & Knitwear.

Some manufacturers have switched to making masks to increase revenue, but sales has not reached set targets as orders drop alongside increasing market supply, he added.

In the seafood industry, the layoff ratio is about 20 percent, and many companies are reporting low revenues, said Truong Dinh Hoe, general secretary of the Vietnam Association of Seafood Exporters and Producers (VASEP).

hs fell 2.1 percent year-on-year to $238.4 billion, with exports dropping 1.1 percent and imports by 3 percent. This ended over a decade of trade turnover growth.

Exports of textile and garment, footwear and seafood, which are among the top categories in terms of value, all declined year-on-year.

These figures explain why Sang, a manager at footwear maker Pouyuen in HCMC, was laid off recently after 10 years of working there.

He was among nearly 2,800 employees that the Taiwanese company, the largest employer in the city, has terminated contracts with because of pandemic-related plunge in orders.

Finding a new job is difficult for the man as most companies are also cutting down on staff. He has decided to work as a motorbike driver for a ride-hailing company to feed his family of four.

“I guess I’ll have to wait for a long time before I can find a stable job.”