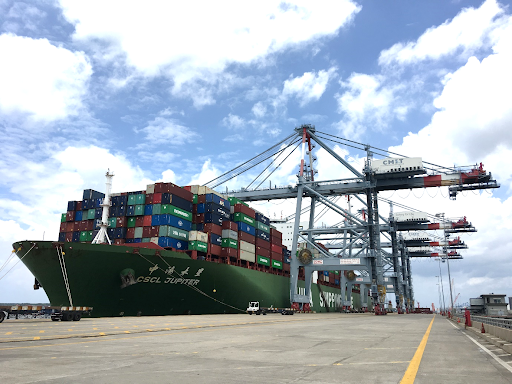 Cái Mép International Terminal receives a container vessel. The Ministry of Transport did not agree with the proposal of cutting container loading and unloading services fees at seaports by 30 per cent. – www.cmit.com.vn

HÀ NỘI — The Ministry of Transport has rejected a proposal of cutting container loading and unloading service fees at seaports by 30 per cent, Nguyễn Trí Đức, chief of the ministry’s office said.

The ministry said that the current container loading and unloading service fees of Việt Nam were much lower than other countries in Southeast Asia.

A representative from Cái Mép International Terminal said that the volume of goods transported through seaports saw significant declines and was forecast to drop by 60 per cent in the second quarter of this year, which would significantly erode seaport revenues.

Further cuts in container landing and unloading service fees would be unreasonable in the context that seaport companies were already facing difficulties.

The Ministry also urged Việt Nam Maritime Administration to propose amendments to the Circular 54/2018/TT-BGTVT about seaport service fees for approval in September to ensure harmonisation of benefits.

Previously, the associations of logistics and import-export companies proposed container loading and unloading service fees to be cut by 30 per cent so logistics costs could be reduced as imports and exports collapsed globally due to the COVID-19 pandemic.

In another move, several towage service providers recently announced cuts on towage service fees by 10 per cent for Việt Nam’s ships operating domestically to the lowest level regulated in the Circular 54 to support firms to overcome the difficult time.

The reduction would be applied for three months, starting from May 1.

The volume of goods via seaports started to slow down due to the COVID-19 pandemic, however, the reduction was not significant, Trịnh Thế Cường from the Việt Nam Maritime Administration said. He added that seaport and marine transport companies must support each other to overcome difficulties.

Statistics showed that nearly 161.5 million tonnes goods were shipped through seaports in January-March, up by 8 per cent.

However, the volume of goods shipped through seaports in April saw a drop of 7 per cent to 53.8 million tonnes. — VNS