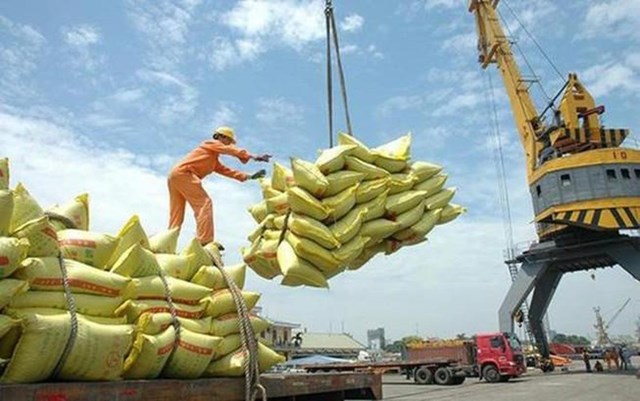 Rice loaded for exports. The country could export rice while ensuring food security amid the COVID-19 pandemic. — Photo vinanet.vn

HÀ NỘI — The Ministry of Industry and Trade (MoIT) on Monday submitted a proposal to Prime Minister Nguyễn Xuân Phúc to remove the quota for rice exports as of May 1.

The current quota means firms were allowed to export 400,000 tonnes of rice in April to ensure food security amid the COVID-19 pandemic.

The ministry said it made the proposal based on the domestic and foreign context, efforts to ensure national food security and the latest data on national rice supply and demand before entering the summer-autumn crop.

The pandemic had been basically controlled and the rice supply in the winter-spring crop had been stable and could be a bumper crop, it said.

Statistics from the MoIT showed the country could export some 3.2 million tonnes when including 1.3 million tonnes from May till mid-June when the summer-autumn crop can be harvested.

It added that if Việt Nam exports 700,000 tonnes of rice in May, the country would still have 600,000 tonnes of inventory in the first half of June. In addition, rice output in the upcoming summer-autumn crop would reach 11 million tonnes. Of which, the Mekong Delta region would account for 8.7 million tonnes.

The ministry said rice prices could fall in the world market as India is considering easing its lockdown in early May, after which the country would be expected to supply the world market with a large amount of rice.

Even if the quota is lifted, rice exporters would be expected to maintain at least 5 per cent of their export volume in the past six months as reserves, and they would also have to supply rice to the local market if the Government requires it.

The 20 biggest rice exporters in the country were asked to sign agreements with at least one supermarket system which sell rice at guaranteed stable price to ensure rice reserves, or risk losing their licences for rice exports if not doing so.

The General Department of Customs on Tuesday reported that 57 rice exporters had opened declaration forms for exports of more than 65,700 tonnes of rice on its online customs portal. The system opened at midnight on April 28.

In addition, nearly 13,000 tonnes of sticky rice was also supplemented into the quota.

Earlier, the MoIT allowed customs declarations for more than 17,800 tonnes of rice which had been stuck at seaports and international border gates before March 24.

As of April 27, firms had shipped 223,000 tonnes out of a total of 400,000 tonnes of rice under the quota set for April, according to the General Department of Customs. — VNS