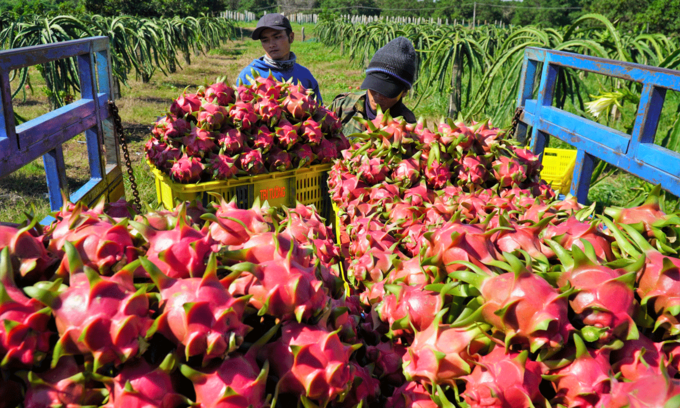 Farmers load dragonfruits onto a truck in the central province of Binh Thuan. Photo by VnExpress/Viet Quoc.

Vietnamese fruit exporters have not been able to ship to the U.S. for days due to a lack of officials to inspect the safety of their products.

Ngo Tuong Vy, deputy director of fruit exporting company Chanh Thu based in the Mekong Delta province of Ben Tre, said she has not been able to send a single consignment in the last 20 days since the U.S. Animal and Plant Health Inspection Service (APHIS) has withdrawn its personnel due to the Covid-19 pandemic.

She was referring to the fact that they went home when the outbreak began and have not been able to return since.

“American experts have not been able to travel to Vietnam due to the limited number of flights, and therefore all exports of fruits must be suspended,” Vy said.

If the delay continues, she could lose the U.S. market to other countries since supermarkets there could seek alternative suppliers, she said.

Other exporters feared the situation could persist until the end of the year.

Vietnamese authorities have said they are working on the issue. Nguyen Quang Hieu, head of the Plant Protection Department’s international cooperation and communications department, said paperwork is being done to bring the experts to Vietnam, and it would be done when a suitable flight is available.

But U.S. authorities do not want the experts to share a flight with Vietnamese students returning home due to fear of contagion, and expect quarantine facilities for them in Vietnam to meet U.S. standards, he said.

“Meanwhile, we will propose that the U.S. should hire Vietnamese personnel temporarily for the inspection to ensure exports are not interrupted.”

Exporters said they are temporarily shifting their focus on other markets such as Taiwan, Japan and South Korea.

Its fruit and vegetable exports to that country in the first seven months fell 0.2 percent year-on-year to $957 million, according to Vietnam Customs.