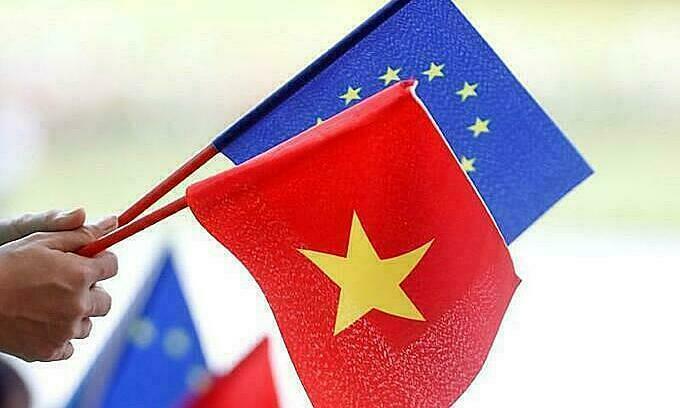 European Union and Vietnamese flags are seen at the signing ceremony of EU-Vietnam Free Trade Agreement at the Government Office in Hanoi, June 30, 2019. Photo by Reuters/Kham.

The National Assembly has ratified the EU-Vietnam Free Trade Agreement, which will cut or eliminate 99 percent of tariffs on goods traded between the two sides.

The legislature on Monday also approved the EU-Vietnam Investment Protection Agreement. Up to 94.62 percent of lawmakers voted in favor of the EVFTA and 95.65 percent approved the EVIPA.

Both agreements will possibly take effect in July.

Under the EVFTA, which took eight years to negotiate, Vietnam will eliminate 99 percent of its import duties over 10 years and the E.U. will do the same over seven.

While the NA approved the EVFTA agreement in full, regulations related to intellectual property listed in the agreement will not take effect until Vietnam updates its Law on Intellectual Property.

For the U.K., the agreement will apply from the time it takes effect until the end of this year and could be extended for 24 months according to the agreement between it and the E.U. for its exit from the bloc.

The trade deal is a comprehensive and mutually beneficial agreement that is in line with the provisions of the World Trade Organization (WTO). It was approved by the European Council in March.

When the EVFTA takes effect next month the E.U. will immediately eliminate import duties on some 85.6 percent of tariff lines, accounting for 70.3 percent of Vietnam’s exports to the bloc.

The E.U. will gradually eliminate 99.2 percent of tariff lines, accounting for 99.7 percent of Vietnam’s exports, over the next seven years. As for the remaining 0.3 percent, it will give Vietnam tariff quotas with import duties of zero percent.

The EVFTA is the E.U.’s second deal with an ASEAN country, after Singapore, and one of few with a developing country.

Nicolas Audier, chairman of EuroCham, said in a press release issued Monday: “The EVFTA is now more important than ever, as trade wars and a global pandemic disrupt normal business operations on an unprecedented scale. Free, fair and rules-based trade is the best roadmap to economic growth, and Vietnam will now have privileged access to an EU consumer market of around 500 million people who will be keen to do business with and invest in a strong, secure, and prosperous nation at the heart of Asia.”

The E.U. was Vietnam’s second largest export market last year behind the U.S. with a value of $41.48 billion, down one percent year-on-year.

The World Bank said the EVFTA could boost Vietnam’s GDP and exports by 2.4 percent and 12 percent respectively by 2030 and lift hundreds of thousands of people out of poverty.